Find out what happened to Breeda, Miro, and our gang of Chicago witches...

THE WITCH COLLECTOR, PART II concludes Breeda's story. Will she find her parents? What's Brandon's deal? Is Miro who we think he is? 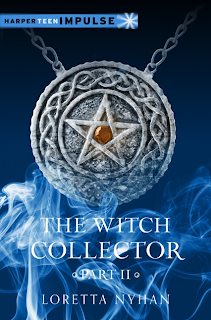 Posted by Loretta Nyhan at 5:07 PM No comments:

THE WITCH COLLECTOR, PART I--OUT IN THE WORLD TODAY!

The Witch Collector, Part I, my digital-original paranormal thriller, is in the world! Check it out on the HarperTeen site here. 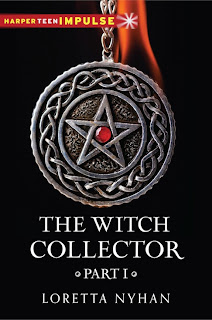 The Witch Collector is a digital original novel in two parts that's a suspenseful brew of magic, dark strangers, and witchcraft—perfect for fans of the Beautiful Creatures and Mortal Instruments series.
The day after her best friend's funeral, Breeda's parents pack her up, usher her into the car, and then drive out of Oregon without looking back. Breeda doesn't know why they left so urgently or why they're headed to Chicago—but she does know that it's against the rules to leave without consulting your Coven Leader. . . . It's a crime punishable by banishment.

All her family has is each other now, in a city that feels strange, unfamiliar, and dark. But when Breeda comes home on her first night in Chicago to find their apartment ransacked and only a bloody handprint left behind, she realizes that you can't outrun the craft.

Visit The Witch Collector web site and follow me on twitter @witchcollector for witchy spells and recipes!
Posted by Loretta Nyhan at 6:02 AM No comments:

So...Kirkus Reviews, the highly respected (and often difficult to please) trade journal, gave I'LL BE SEEING YOU a starred review! Suzy and I are thrilled! Here's what they wrote:

Two World War II soldiers’ wives begin a pen-pal correspondence and help each other through the emotional upheaval of war.

Rita is a middle-aged professor’s wife in Iowa, and Glory is a young mother in Massachusetts. Through a pen-pal program, the two become fast friends in 1943 and share their fears, temptations, trials and triumphs as they move through the war years. Rita’s husband and son are both in uniform, her husband in Europe and her son on a ship in the South Pacific. Glory’s husband is overseas, too, but her life is complicated by the shadow of a past romance with her husband’s best friend, who is medically unable to serve in the war. Glory has two children under 5, and Rita’s son is apparently in love with the least acceptable girl in town; Rita is a German-American married to a second-generation Italian, while Glory hails from New England money. The two establish a solid friendship that grows ever more devoted, and through their letters and the occasional correspondence to and from secondary characters, we get a powerful, fascinating look at the war years and at the interesting choices and tragic consequences of a nation enduring an overseas war.

Engaging, charming and moving, a beautifully rendered exploration of WWII on the homefront and the type of friendship that helps us survive all manner of battles.

YAY!!! I'LL BE SEEING YOU can be pre-ordered at all the usual suspects, Amazon, B&N, etc., or order through your neighborhood indie!
Posted by Loretta Nyhan at 12:16 PM No comments:

THE WITCH COLLECTOR comes out April 2, which is a little over ONE WEEK away. I can't wait!

In anticipation of the release, Hypable did a fun interview with me. Read it here: http://www.hypable.com/2013/03/25/hypable-exclusive-author-interview-loretta-nyhan/

Also coming soon:  thewitchcollector.com !!!!  Visit for info about the book, spells, and other fun stuff!

Find me at epicreads.com ! I'm LorettaNyhan.

Season of the Witch

It's October, the month of my favorite holiday, Halloween! I love all that is witchy--spells, talismans, tarot cards, so it thrills me to announce the sale of my latest book, to HarperTeen. From PM:

Loretta Nyhan's THE WITCH COLLECTOR, about an unmarked witch on the run from a supposed serial killer as she desperately searches for her missing parents, to Sarah Barley at Harper Teen, by Joanna Volpe at New Leaf Literary & Media (world English).

I'd like to give big thanks to Joanna Volpe of New Leaf Literary and Media, to my gracious editor Sarah Barley, and to my critique partner extraordinaire, Erica O'Rourke. Thanks, ladies!!!

Okay, in honor of the sale, I'm linking to my favorite rocker-witch. Enjoy!

Hey, everyone! Suzy and I were interviewed by Publishers Weekly about how our growing friendship resulted in our first novel, I'LL BE SEEING YOU. Check it out here.
Posted by Loretta Nyhan at 7:18 AM 1 comment: